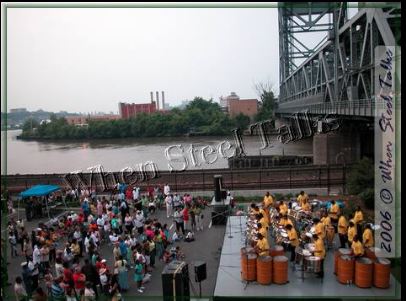 Trinidad All Stars in the Bronx

Bronx, New York - It was the turn of the Bronx, New York, to experience the music of Trinidad All Stars (pictured right) and CASYM steel orchestras, as they got together for the final time this past Monday June 19, in what had been three consecutive days of performances for the two bands. After their Saturday and Sunday engagements at KC's Hideaway in Brooklyn, Trinidad All Stars got a chance once more to display why they are one of the most well-known, heralded and sought-after steel orchestras in the world.

The Bronx steelband extravaganza was billed as a "Salute To The Caribbean Concert," and was a joint presentation of the New York Daily News and the office of Bronx Borough President Adolfo Carrion, Jr. The event took perfect advantage of people returning from work via the No. 1 train which overlooked the car park of the River Plaza Shopping Center where it was staged; many simply made their way down and around to the performance area. After words of welcome and introduction by Daily News Vice President/Promotion & Community Affairs, John G. Campi (pictured right), CASYM got underway with their presentation; Campi took a keen interest, and introduced each selection during their set.

It was not only those directly present in front the band who got an earful, and in other cases, an eyeful of the concert activities. Some commuters who were coming off the elevated train did not bother coming down to the car park, they seized the advantage afforded by their 'elevated' position, and took in the concert (right). Others were also stationed above, not as high, but at as good a vantage point - just off the bridge overlooking the car park. A Circle Line sightseeing ship (left) cruised along the Harlem River, with passengers craning their necks and waving as the boat passed; finally, there were the many Metro North trains that roared past, each time momentarily overpowering the music. One operator even honked his horn, and waved as he sped past with his passenger-filled cars in tow.

Borough president Adolfo Carrion, Jr. accompanied by his Special Assistant, Al Benninghoff, arrived during CASYM's performance. He was greeted (left) by Campi; taking the stage shortly after, he addressed all present, thanking them for their presence, and described the concert as an event held in recognition and appreciation of, the integral part played in his borough by its Caribbean residents. Carrion, Jr. then went on to demonstrate just how much of a 'people's borough president' he was.

In customary hands-on fashion, he availed himself of a quick 'lesson' in steelpan by looking on as two of CASYM's front line pannists played, then grabbed a couple of sticks himself and, behind a tenor pan (left), got into the spirit of the performance with the orchestra, guaranteeing some 'picture-perfect' moments. Veteran CASYM bass player Curtis Lynch, who worked the crowd to ensure their involvement, even got the borough president to lead the crowd (right) in singing Olé Olé, the well-known refrain from calypsonian Arrow's classic 'Hot Hot Hot.'

As CASYM's set ended and they cleared the stage of their instruments, making way for Trinidad All Stars to set up theirs, John Campi took the audience on a bit of a historic journey regarding one of the hallmarks in the legacy of pan in New York - the coming of Desperadoes Steel Orchestra to perform at Carnegie Hall. Campi explained in essence that some years ago, he was extremely taken with steel orchestras after attending a panorama festival in Trinidad. He would subsequently make the arrangements and pave the way for Desperadoes to appear at Carnegie Hall in the 80s. The New York Daily News for a number of years after that, brought up from Trinidad and Tobago, Panorama champion orchestras in their year of triumph, to perform on the steps of City Hall in New York. Nowadays, Campi proudly proclaimed, the New York Daily News has its own band, the Daily News CASYM Steel Orchestra.

Trinidad All Stars was up next, and delivered several numbers which were very well received by the crowd. Several members of New York's pan community were present, determined not to miss the opportunity of seeing All Stars in concert, this time for free. The orchestra was joined on stage by promoter Kenneth Charles aka 'KC,' who was also responsible for bringing All Stars to New York. As had been the case at their two previous appearances, the self-proclaimed 'James Brown of Soca' performed once again with the band (right), catching the interest of those looking on. All Stars' set included several crowd pleasers such as R Kelly's 'I Believe I Can Fly' and Bob Marley's 'War.' The latter turned out to be their final piece, as the threat of rain brought their performance to a premature end to the disappointment of many, including the All Stars players themselves.

All throughout the proceedings, show attendees had the opportunity to sign up for an exclusive one-time only Daily News subscription deal, offered only at the event. New York's Mayor Michael Bloomberg who had been publicized to attend the concert, was a no-show. Those who came out to the concert were not disappointed though, and for many, it was a final opportunity to catch Trinidad All Stars in concert before their return to Trinidad the following day. At the end of the concert, the 'All Star cast' and band manager Berry Hunte got together for a quick photo-op with When Steel Talks (pictured left).

'Salute to the Caribbean' Concert, Bronx - In Pictures

'Salute to the Caribbean' Concert, Bronx - In Pictures

Trinidad Pan In Search of Fame and Fortune

The Stars Came Out - And They Did Shine